Böhmermann versus Erdoğan: The Likely Outcomes for Freedom of Expression

In March 2016, German comedian, Jan Böhmermann, read a poem on his TV show, Neo Magazin Royal, entitled “Schmähkritik,” or “Defamation,” which is shown above.  Recep Tayyip Erdoğan, the President of Turkey, didn’t take it well. He has argued that the poem violated Article 103 of the German Civil Code and constitutes a “slanderous insult” against a “foreign head of state.” This freedom of expression case will result in a criminal investigation along with a civil lawsuit for defamation, which Mr. Erdoğan filed himself and is due to start in a couple of weeks. There is nothing worse than being heckled, especially by lawyers.

It would be difficult to prove and unhelpful to speculate that political pressure surrounding the current migrants crisis directly affected the decision at this early stage in the process. It would have been more difficult to explain a rejection of Erdoğan’s request than to approve an investigation under German Law. Whilst speculation on this topic has been wide, Angela Merkel, the Chancellor of Germany, directly referred to the importance of the judiciary in making this decision. In addition, she has promised to abolish the archaic laws that were used by Erdogan to press charges.

In fact, these two decisions complement one another. If Merkel wants to see this law removed, it is logical to pass this over to the judiciary, where their judgement will likely state that justice might be better served if the law was abolished, on grounds of its anachronistic and outdated nature. A more pessimistic interpretation is that the decision is politically driven. Merkel initially responded by described the poem as “deliberately offending” prior to the agreement with Turkey over the migrants crisis. For Merkel to allow this case to proceed is seen by many as undermining freedom of expression.

We cannot ignore the relevance of Erdoğan in the analysis of German proceedings. Erdoğan is unpredictable in his vociferous use of defamation clauses. One political hypothesis could be that Merkel is allowing criminal proceedings to go ahead to expose the excessive use of these archaic laws by Erdoğan in order to mollify him. One of the reasons this particular case has not been picked up by law journals and legal commentators is that it is still a developing incident. Perhaps this case may never reach a German court room and it is even less likely to reach the the European Court of Human Rights (ECtHR). But what if it did? It seems credible that this may become a landmark case, signifying the beginning of the end for defamation laws that protect foreign heads of state.

Both at the German and European level, the social justification for a message to be heard often supplants the damage or pain felt from an insult. Freedom of expression is clearly defined in Human Rights legislation under article 10 of the European Convention of Human Rights. It affords people the right to freely express themselves “regardless of frontiers,” and importantly it includes restrictions such as restricting speech in the interest of “public safety.” The interpretation of article 10 has been built up over many years to include the common theme of imparting information that is in the “public interest.” Other human rights instruments have similar clauses and wording. The Inter-American Court of Human Rights expressed a similar view that freedom of expression should allow for “promoting informative pluralism.”

In this regard, the criticism of politicians and heads of state is protected under article 10. In Spain, journalists were successful in overruling a conviction of insulting the government because it created the “opportunity for politicians to reflect and comment” on political debate rather than prevent it. The European Court of Human Rights has consistently supported journalists and members of the public and encouraged states to “tolerate criticism even if it may be provocative.” The ECtHR also broadens these parameters when it comes to politicians. In the Lingens case, the court noted that “The limits of acceptable criticism are thus broader regarding politicians, who inevitably and knowingly lay themselves open to close scrutiny.”

Another aspect to consider is the more offensive and insulting language Böhmermann uses such as “kicks Kurds, smacks Christians, all while watching child pornography.” This is a value judgement which would most likely be viewed as outside the remit of journalistic best practices. However, even in this instance, the ECtHR would likely rule in favour of Böhmermann, as there is no pressing social need to imprison the plaintiff for his actions. Historically, ECtHR has rarely been convinced that this kind of criticism is libellous or demands a reaction as strong as a criminal conviction.

Böhmermann has used some offensive language but parts of his piece bear close relation to facts, many of which are made available to the public. In the past, this has been important in overruling domestic judgements. In the case of Colombani and others, the journalists were acquitted of insulting the sovereign using the facts made publicly available by government reports. Böhmermann makes reference to the building of a palace in a nature reserve “without a permit” and to the closing down of “newspaper offices.” Erdoğan’s 1150 room palace has been deemed unlawful by Turkey’s own Council of State, whilst Erdoğan took over the Zaman newspaper in 2013. In addition, the Colombani case addressed the issue of insulting a foreign head of state, the court stated, giving “foreign heads of state a special status…[which] could not be reconciled with modern practice and political conceptions.”

In general, the European community has moved towards the abolition of laws protecting foreign heads of state specifically. It was historically used as a means of maintaining good diplomatic ties, but is now widely regarded as outdated. Belgium repealed a similar law protecting foreign heads of state in 2005. Hungary, the Czech Republic and most recently, Romania repealed these laws in 1994, 1998 and 2014 respectively, while Italy and Lithuania are currently discussing repealing their laws. One of the most famous instances was in France in 2005; having abolished laws against insulting foreign presidents, it went on to remove Article 26 of the Press Law protecting the French president from insults. Thomas Oppermann, of the Social Democratic Party in Germany stated,  “Prosecuting satire [by Böhmermann] on the basis of a lèse-majesté law is not appropriate to the modern age.”

In this context, it is surprising that the law has not been abolished already, though what is even more surprising is that the law requires no proof of falsity or malice. Often the repeal of these laws can be an organic and inharmonious process. In the unusual case of Cyprus for example, they have repealed defamation laws against private individuals but not against foreign members of states. The map below shows the context of defamation laws which protect the state, head of state or symbols of the nation. Across Europe there are huge variations in legislation and the ECtHR has been consistently sceptical of their relevance and importance today. 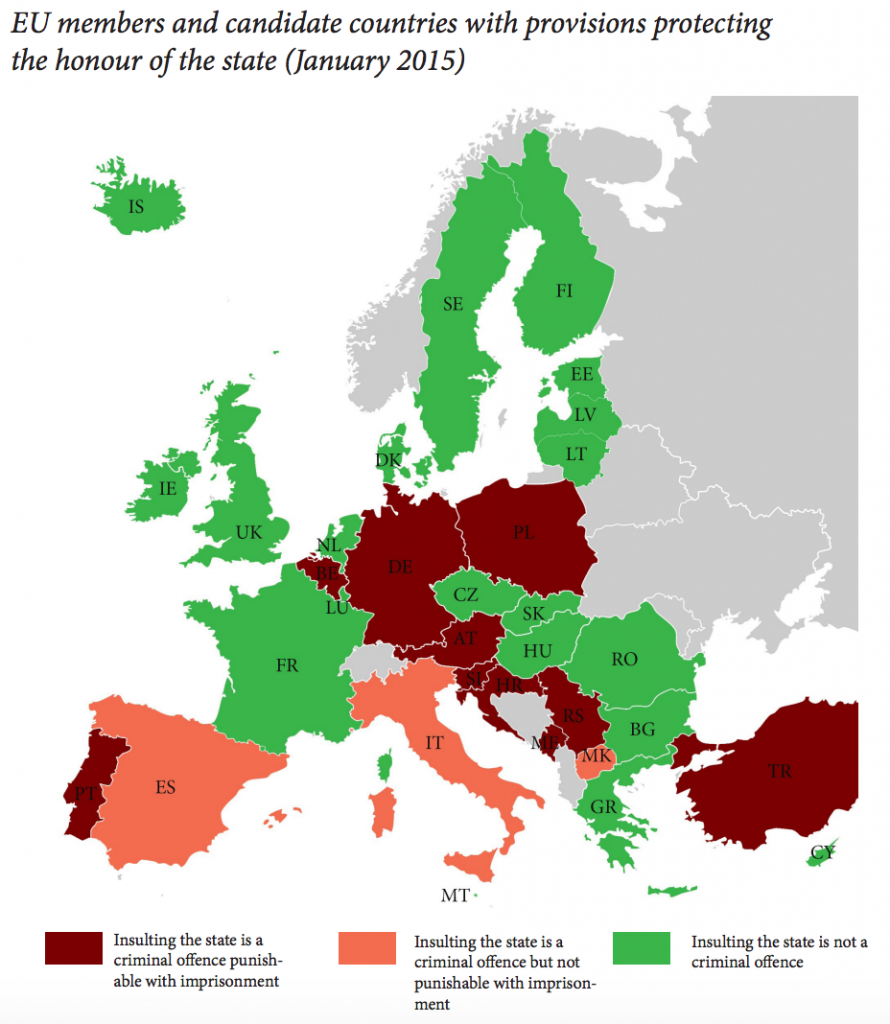 At a constitutional level, the right to freedom of speech in Turkey is protected and was even amended in 2001 to be align it more closely with article 10 of ECHR. Furthermore, Turkey has signed and ratified the ECHR and contributed over €33 million to its budget in 2016. Turkey is party to the seven principal human rights conventions of the United Nations and 96 Council of Europe conventions. However, Turkey lies closer to worldwide norms than to European standards of practise. Although it has ratified many European treaties and international conventions, it often strays from these norms in practice. This does not mean that the court considers all insults as justifiable. Indeed, in the case of Krutil v. Germany, where an article had compared a journalist with being like Goebbels, article 10 was not upheld.

Personal attacks and gratuitous insults are not always protected by article 10 but these cases often pertain to excessively critical language and verbal attacks. The court has ruled that government officials should be able to continue their work “free of undue perturbation,” but this is unlikely to extend to the protection of a head of state who lives in a different country and has suffered no visible damage to his professional credibility as a result of the video. In the Turkish context, the previous head of state, Süleyman Demirel, sued another politician for lambasting him with a “hail of insults.” Yet even in this case, the European court overruled the Turkish court’s decision as “over-protecting” the president. Erdoğan has frequently used defamation as a means of punishing critics during his rule. It is thus unsurprising that Böhmermann garnered the attention of the Turkish premier.

Erdoğan’s success should not be exaggerated. He has been unsuccessful in a large number of cases and his compelling political rhetoric rarely has an impact on the validity and applicability of the law. Internationally, Erdoğan has threatened to sue The London Times for criticism and smear campaigns against journalists with almost no legal precedence. ECtHR has previously overruled Erdoğan’s judgements, in Tuşalp v. Turkey (2012), where two defamation cases were filed by Erdoğan against a journalist, which resulted in €4300 fine. However, ECtHR found that the Turkish courts had violated article 10 and had failed to protect the journalist who was disseminating information important to the public and within the “scope of political debate.” The pre-existing laws protecting sovereigns abroad are not widely supported by international treaties and are likely to be subject to revision if Erdoğan continues to draw attention to them.

Erdoğan is also undermining the validity of these insult laws by consistently criticising other world leaders, politicians, public figures and international actors as well as individuals. Erdoğan called the Abdel Fattah al-Sisi, the Egyptian President, an “illegitimate tyrant.” The Turkish President has consistently used such language and Turkey’s government fails to meet other the European standards of freedom of speech and human rights. The words of Deputy Prime Minister of Turkey, Numan Kurtulmuş, exemplify Turkish misconceptions of international norms as he described Böhmermann’s poem as a “serious crime against humanity.” Although the poem is insulting, it is a worrying misapplication of the term by a senior Turkish politician. Ironically enough, the first use of the term “crime against humanity” was against Turkey in 1915. Turkey calls upon these laws frequently and their excessive use will diminish their credibility worldwide. Indeed, in using these laws repeatedly and unsuccessfully, it will likely prompt Germany to revise its laws in accordance with the ruling by the ECtHR.

Erdoğan’s excessive invocation of such laws laws against insulting heads of state, both domestically and internationally, may actually be diluting the credibility of these laws worldwide. The use of this law in Germany and in other countries draws attention to its lack of viability in practice and its almost direct contradiction of European Human Rights Laws and European social norms in general. Moreover, these laws are widely viewed as archaic, originating from a time prior to international laws designed to protect freedom of expression. Political figures, particularly Erdoğan, often begin these court cases on the premise that their political career or professional and private lives have been negatively impacted. The ECtHR has rarely found this reason compelling and have often highlighted the failure of domestic courts to convincingly establish “any pressing social need for putting the Prime Minister’s personality rights above the journalist’s rights” when issues of public interest are concerned. Has Merkel made the correct decision to uphold the letter of the law in the face of Erdoğan? We will have to wait and see, but this might just become a landmark case that will benefit European freedom of speech laws in the long run, even if it exposes continental shortcomings in the short-term.

Sebastian Hicks is a University of London graduate and he is currently studying Human Rights and Humanitarian Action at Sciences Po. He finds most topics, from the most basic to the most complex, difficult to understand and finds writing about them often clears things up.