Honduras inaugurates its first female President: what does this signify for the Americas?

New Honduran President Xiomara Castro delivers a speech after being sworn-in during a ceremony in Tegucigalpa, Honduras January 27, 2022. REUTERS/Fredy Rodriguez

Xiomara Castro was sworn in as President of Honduras on the 27th January 2022, marking the first election of a female leader in Latin America in over ten years. She is the first female President the country has ever seen.

The end of the road for the right-wing National Party

Castro’s presidency brings an end to the reign of the right wing National Party, el Partido Nacional de Honduras, which had been in power since 2010. The reign of the  National Party, which came into power via a coup d’état, was marked by a severe decline (from 53% to 30%) in the country’s support for democracy (Latinobarómetro 2020). In 2017 Juan Orlando Hernández won a second term after rigging the election, which epitomizes the high degree of corruption plaguing Honduras under his rule.

A glance to the past: The reign of the National Party

In June 2009, the Supreme Court issued an order to detain the President, Manuel Zelaya, accused of corruption and abuse of authority. He was then captured by the military and was taken to exile in Costa Rica. This ousting, defined as a coup d’état, led to the 2009 Honduran constitutional crisis. The accusations against Zelaya were classified as being politically motivated.

Following the ousting of Zelaya, the President of the National Congress, Roberto Micheletti assumed Presidential power on the 28th of June 2009 until the inauguration of the next president. Porfirio Lobo Sosa of the National Party won the national elections held on the 29th November 2009. He was later inaugurated as President of Honduras on the 27th of January 2010 and was then succeeded by Juan Orlando Hernández on the 27th of January 2014 until the presidency of Xiomara Castro in 2022. Xiomara Castro de Zeleya is the wife of Manuel Zelaya.

Porfirio Lobo Sosa’s presidency was very controversial. On one hand he was criticized by the Human Rights Watch for the human rights violations against journalists and members of the National Popular Resistance Front (NPRF). The NPRF is a grassroot organization that aims to restore Zelaya to power.   On the other hand, he was praised by the Obama administration for attempting to reconcile the country.

Juan Orlando Hernández’ presidency:  from lack of legitimacy to running a narco state

The controversies continued during Juan Orlando Hernández’ presidency. To begin with, the results of the Honduran 2017 general election – where Hernández won election by a small margin of 0.5% –  were disputed. The results were announced on the 17th of December 2017, 21 days after the election.  The Organization of American States (OAS) called for fresh elections after suggesting that the election was fraudulent due to “irregularities and deficiencies”.  Furthermore, the United Nations criticized the “excessive and lethal force” used by security forces against the civilians between the election and the inauguration of Hernández.

In addition to his questionable legitimacy following the 2017 general election, Hernández is also accused of running a narco state. The accusations began in 2015 as Honduran businessmen were indicted in the United States for alleged money laundering for drug traffickers.

On the 30th of March 2021, Hernández’ brother, Antonio Hernández, was sentenced in the US to life imprisonment on charges related to drug trafficking. During this case, Juan Orlando Hernández, was identified as a conspirator in drug trafficking and money laundering. Official court documents stated that $1.5 million in drug proceeds were used to help elect Hernández in 2013. On the 15th of February 2022, Hernández surrendered himself to US authorities following the issue of an extradition warrant against him.

This corruption within the National Party and within Hernández’ presidency led to a want for change by the Honduran population.

A time for change in Honduras

Castro’s election brings an end to the bipartite  electoral system within the country, which had been dominated by the National Party and the Liberal Party, el Partido Liberal de Honduras. Castro won 51.12% of the vote back in November 2021, putting her ahead of the National Party candidate (Nasry Asfura, 36.93%) and  the Liberal Party candidate (Yani Rosenthal, 10%). Castro won the largest number of votes in the history of Honduras, which highlights the fact that the citizens of Honduras were eager for change.

The new president, a democratic-socialist from the left-wing party, Libre: Libertad y Refundación (Free: Freedom and Refoundation), won the election based on her promises to tackle corruption within the government and violence resulting from drug trafficking whilst also looking to ease the country’s strict abortion laws(currently prohibited). However, challenges within Castro’s party highlight uncertainties about her ability to implement these changes.

Looking at data from the Corruption Perception Index, it is evident that Honduras has been plagued by high levels of corruption. The scale, which ranges from 0 (very corrupt) to 100 (perfectly clean), paints a dire picture of the Honduran political landscape, and clearly shows a decline in Honduras’ score by the end of Hernández’ second term. 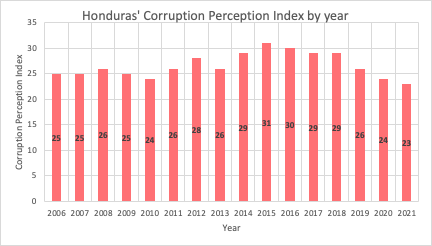 Graph 1: Data collected from the Corruption Perception Index on Corruption in Honduras.

According to the Global Organized Crime Index (GOCI) Honduras has a 6.98 criminality score and is ranked 10th out of 193 countries. The GOCI analyses countries based on their crime levels and gives them a score from 1-10 (lowest to highest organized crime levels).  It also has two main categories which includes criminal market and criminal actors. The criminal market indicator has a score of 5.7. Within the Criminal Market indicator, it is evident that there is a high level of illicit activity in Honduras related to drug trafficking as Cocaine Trade has a score of 7.5 and the same score is also given for Cannabis Trade. Whilst the criminal actors category has a much higher score of 8.25 which includes the following indicators: mafia-style groups (8.5), criminal networks (8), state-embedded actors (8.5), and foreign actors (8). The high score given to state-embedded actors suggests high levels of corruption within the country linked to criminal activities.

Apart from having adopted challenges related to corruption and drug trafficking, Castro also has other obstacles.

Challenges within the Congress

Castro’s party won fifty seats within the congress, and created a pact with the Partido Salvador de Honduras (PSH) (10 seats) and the Partido Demócratica Cristiano de Honduras (1 seat)   which meant that Castro had a total of 61 seats in Congress. The Honduran Congress is a unicameral legislature and has a total of 128 seats. 61 seats currently form the government, whilst 45 seats are government opposition. The 22 seats of the Liberal Party are classified as confidence and supply which means that they will support the government in motions of confidence and appropriation of budget by either voting in favor or abstaining from the vote.

Despite this pact and the fact that Castro had a majority within the congress, twenty deputies of Castro’s party defected and aligned with the National Party of Honduras to elect a different President of the National Congress of Honduras, Jorge Calix. Even though Calix was originally a member of the Libre party, he was expelled from the party for “treason” by Xiomara Castro. The defection of the twenty deputies and Calix’s acts have led to internal divisions within Castro’s party as they rebelled over her intentions to install a centrist President of the National Congress. However, this crisis was calmed as Castro recognised the election of Calix and allowed the “traitors” to return to the party following an agreement signed on the 7th of February. The calming of the situation grants Castro a majority within the National Congress.

A revival of Honduras’ relations with the United States?

Kamala Harris, Vice President of the US, attended Xiomara Castro’s inauguration. This highlights the US’ desire to strengthen relations with the Central American country. Central America poses a challenge to the US with its authoritarian leaders and lack of human rights provisions which has led to a great outflow of migrants from the region. Honduran-US relations were further limited due to the previous president’s  alleged close ties with drug traffickers.

Xiomara Castro is a clear contrast to her predecessor as she vowed to fight corruption within her country: “We must uproot the corruption of the last 12 years of dictatorships,”. The president’s desire to uproot corruption and to uphold human rights will facilitate relations between the US and Honduras, as the US is also targeting corruption and drug trafficking. Castro advocates for a United Nations mission to combat corruption within the country and the region.

Furthermore, it also opens the opportunity to tackle the migration crisis within the region which exists due to the high poverty levels within the country.  Tackling poverty is one of Castro’s key objectives as poverty levels have been exacerbated by the ongoing pandemic. According to the World Bank, Honduras’ economy contracted by 9% in 2020.  Harris’ office has offered the US’ support in eliminating inequalities in the country by offering $1.35 million for refurbishing educational and health facilities to fight the pandemic.  In addition to this, Castro’s presidency opens up the doors to those that fled persecution after having protested against the 2017 fraudulent elections as she aims to reunite the country and re-install respect for human rights.

Current relations between the US and Honduras are growing, however, the high levels of corruption and drug trafficking within the country will affect Castro’s ability to enact change within the Honduran  society will be a determining factor in the countries’ future relations. Whatever successes Castro might achieve, her election will have significance for the rest of the Americas.

The pink tide, which took place at the beginning of the 21st century, was a political wave in Latin America where electorates turned to support left-wing democratic governments. It occurred concomitantly to a surge in commodity prices. Brazil saw the election of Luiz Inácio Lula da Silva in 2003 whilst Venezuela voted Hugo Chávez in power in 2002. In 2006, Bolivians witnessed the beginning of the presidency of left-wing leader Evo Morales . It was also seen in other countries such as in Argentina and Ecuador.

These left-winged leaders worked to eradicate poverty and inequalities within the country. For example, the government of Lula in Brazil created a social welfare programme called Fome Zero (Zero Hunger) which aimed to eradicate hunger and extreme poverty within the country. Another example can be seen in the case of Bolivia as Morales tried to rid the country of poverty whilst also improving the rights of indigenous people, who have been historically discriminated against, by supporting the teaching of indigenous languages in schools.

2021 saw the return of left-wing leaders in Latin America. This is embodied  by Castro’s victory in Honduras  and that of Gabriel Boric who won the presidential elections in Chile at the age of thirty-five on the 19th of December, 2021. Peru also contributed to this new pink tide with the election of schoolteacher and union leader Pedro Castillo to the presidency on July 28th, 2021. Some argue that the resurgence of the pink tide began with the presidency of Andrés Manuel López Obrador in Mexico in 2018 followed by the beginning Alberto Fernández’ presidency in Argentina in 2019.

On the other hand, Guillermo Lasso rose to power in Ecuador as the first-center right President in nearly two decades and Daniel Ortega remained in power in Nicaragua following elections which were heavily criticized by the Organization of American States as well as by other actors such as the European Union.

Considering the upcoming presidential and legislative elections in Costa Rica, Colombia, and Brazil, will we see the return of the pink tide and the growth of leftist leaders in Latin America?

TPG Insight : What’s next for Mali after the end of the Barkhane operation?